No matter how lightly you pack, you only have so many hands. If you’re flying solo, you can’t manage your checked bag, carry-on bags, stroller, and car seat alone. Lugging a car seat is tough even when two adults are in the picture. If your kid is big enough not to require a stroller car seat attachment, think seriously about leaving your car seat at home or in your car on the airport lot and renting one at your destination. Hertz offers infant, child, and booster car seat rentals, usually for less than the daily rate for the car itself.

Most domestic airlines charge extra for checked bags heavier than 50 pounds. Exact pricing varies by airline, but you can generally expect to pay $25 to $35 for each of the first two checked bags under 50 pounds. Pricing rises steeply over 50 pounds — up to and over $100 per bag, depending on its weight. International weight limits vary. In Europe, 20 kilograms (about 45 pounds) is a typical “overweight” cutoff. On longer vacations involving multiple flight segments, always check baggage weight limits for each airline. The good news: In our experience, airlines treat overweight thresholds as guidelines rather than gospel. I’ve twice exceeded the limit by only 3 or 4 pounds or kilograms and didn’t pay an overweight baggage fee. Nevertheless, when you’re lugging heavy items like formula, toys, and a portable baby chair, confining your entire family’s possessions to a single checked bag isn’t always possible without running seriously afoul of weight restrictions. To reduce checked bag weight, stuff as much heavy stuff — solid food, formula, wipes — as you can into your carry-ons. And because a second checked bag is cheaper than a single overweight bag on most airlines, it’s generally best to bring it, even if you expect it to remain half-empty throughout your trip. It’s more room for souvenirs if nothing else.

The worst that can happen is that they say no — which is precisely what they’ll say on domestic routes 9 times out of 10. Frequent flyer status holders are more likely to succeed since they can pull rank, but there’s only so much the airline can do on a fully booked flight. Your best chance of success is likelier to come at the last minute. Depending on the airline and route, some gate agents have the discretion to move passengers around before all the seats are assigned. Your dream scenario here is an upgrade to a bulkhead seat with enough legroom to accommodate a bassinet attachment. A comfortable horizontal sleeping space would have made our lives a lot easier on the long, screamy flight to Europe. Bulkhead seats are rare, and not all planes have them at all (our European flights’ narrow-body 757s didn’t). If you don’t score one, all is not lost. There’s always economy plus with its precious extra legroom. That’s exactly what we got on our outbound flight to Europe — $500 or more in added seat value at no additional charge. We were incredibly lucky to receive such a valuable upgrade. But our experience lays bare the reality that families with small children are more likely than unencumbered adults to score when upgrades are available. 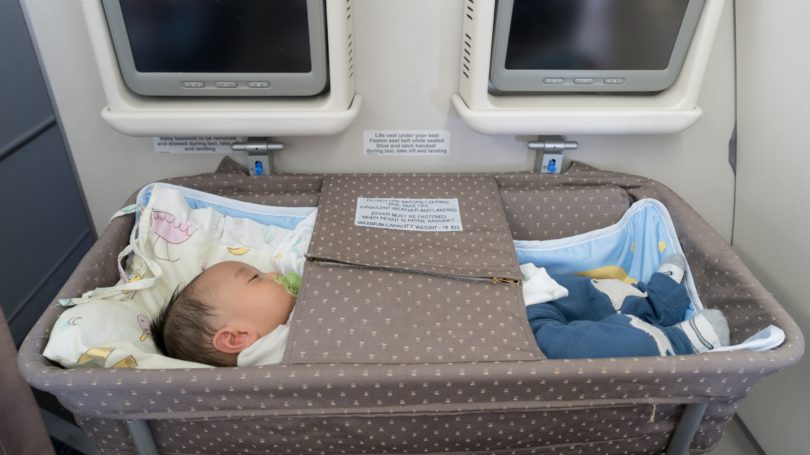 On two-parent journeys with airlines that distinguish between basic economy and “main cabin” economy, always pay for a main-cabin fare. On a typical route, the main cabin can cost 15% or 20% more than the basic economy, but it’s the only way to guarantee seats together. Trust me: You’ll be glad you sat together. Getting up from your seat every time you need to hand off Baby — which, between feedings and bathroom breaks, can happen several times during a flight — is inconvenient and, during meal or beverage service, sometimes impossible.

Why visit a third airport when you can fly directly to your destination? Easy: Because it’s often cheaper. Sans child, a layover is a small price to pay for the lowest possible fare — assuming you don’t need to be at your destination by any particular time. Once you’ve welcomed a little one into the world, however, you may think differently. Shepherding an infant or toddler through a major airport is no easy feat, and many parents are happy to pay more to avoid doing it more than necessary. My wife and I certainly are. Although we’re more likely to fly direct these days, we’ve managed to keep our airfare spending in check by flying at odd times — the traveler’s version of the early bird discount. On at least one occasion, flying direct and driving to our final destination was cheaper than flying all the way, which would have required a layover before a quick second flight.

Many hands make light work. All the more reason to take Grandma and Grandpa along for the adventure if they’re willing to pay their own way. If the grandparents are uninterested or unavailable, ask close friends or relatives. Just make sure they understand what they’re getting into: they’ll be in close quarters with a helpless baby for the duration of the vacation and pulling some shifts on child care duty. While our son hasn’t yet traveled with our friends or other relatives, we have taken his grandmother on two family vacations since his birth: a five-day trip to Seattle and an eight-day journey to Europe. On both, her presence was welcome, not least because of her willingness to pull babysitting duties in the evenings. My wife and I didn’t escape our son’s clutches every night, but we wouldn’t have been able to sneak away for any unhurried dates without Grandma’s help. Unless you’re paying their way with miles or credit card rewards, adults don’t fly free, which is why it’s essential to be clear if you need them to pay their own way. Adding an adult to your travel party can reduce your per-person lodging costs, however. When we travel as a multigenerational unit, we usually bypass hotels in favor of whole-apartment rentals. With three adults splitting the cost of a single flat rather than two hotel rooms, we invariably come out ahead.

As Infants Age, Give Them Their Own Seat — if It’s Fiscally Feasible

Our son was a model lap infant through his 8-month birthday: quiet and cheerful when awake but often unconscious. Then, something changed. Two three-hour flights taken just before our son’s first birthday were unmitigated disasters. There was near-constant screaming, violent thrashing — the whole nine yards. Weeks later, our outbound flight to Europe was even worse at the start, though he eventually tired himself out and slept fitfully for the second half. The return journey was only slightly better, in large part because the plane was half-empty. After those back-to-back ordeals, we resolved with regret to prematurely bid the lap infant allowance adieu. It’s just too much with an increasingly world-aware little one who really hates to fly.

As a general rule, kids under age 2 fly free within the continental U.S. (and sometimes farther afield) as “lap infants.” If you’re willing and able to control your kid for the duration of the flight, you don’t have to purchase a separate fare for them. On most international flights, lap infants under age 2 aren’t entirely free. Most airlines charge 10% of the adult fare, but pricing can range up to 25%, depending on the airline and destination. Lap infants are often more expensive on trans-Pacific flights, for instance. Some discount airlines, such as Southwest and JetBlue, waive lap infant fares (though not taxes) on international flights within North America or the Caribbean. For safety reasons, one adult can’t travel with more than one lap infant. If you’re flying solo with two under-2s, you need to purchase a seat for one. And if you book online, you may need to call the airline to add your lap infant after you confirm your booking. Don’t forget this step — it’s a major headache and a significant time suck at the airport if you do. To be clear, holding your infant for the duration of the flight is not as safe as strapping them into an airline-approved car seat or restraint. If you’re concerned about what can happen in the event of severe turbulence or a rough landing, your best course of action is to pay for an extra seat. But there’s a chance you won’t have to. When you arrive at the check-in counter, ask airline staff if the flight is fully booked. If it’s not, see if they can move other passengers around to free up a seat next to you. The American Academy of Pediatrics has more on safe flying tips for parents with very young children.

A flight’s timing doesn’t matter as much for newborns, who’ll probably conk out once the plane reaches cruising altitude and wake up only to feed. For slightly older children on some semblance of a sleep schedule, flight timing is important, perhaps decisive. It can be advantageous to pay a premium for a flight scheduled close to your kid’s regular bedtime, especially if the route is long enough to allow for quality sleep. On shorter routes, takeoffs just before regular naptime work well — though, for us at least, predicting naptime is more art than science. Following this advice isn’t always practical or affordable — and sometimes, it’s neither. A flight that arrives at your destination hours before check-in time creates new logistical issues — namely, how to kill time, possibly with baggage in tow, in an unfamiliar place. And ideally-timed flights are often more expensive because they’re more popular. If the cost is more than you can bear, you may have no choice but to sacrifice convenience and put up with an irritable baby.

Every airline accommodates paying customers, but some are known to be more family-friendly than others. Of the three airlines we’ve flown since welcoming our son — Delta, American Airlines, and Aer Lingus — we think American is the best for families with small kids. However, the differences were subtle, and our experiences may not be typical. We’ve heard Southwest is particularly family-friendly but haven’t flown with them yet. Before you book, talk to fellow parents and browse online travel forums to reach your own conclusions about the best airline for your family. Note that if your home airport is small or you’re flying to a destination served by only one airline, you may not have much choice.